The battery is used, it feels not durable, and the capacity is not as much as before. These are the manifestations of the continuous decay of cycle life.

The decay of the cycle life is actually a change trend of the battery's current actual usable capacity, which is declining relative to its rated capacity at the factory.

For an ideal lithium-ion battery, the amount balance does not change during its cycle, and the initial capacity in each cycle should be a certain value, but in reality the situation is much more complicated. Any side reaction that can generate or consume lithium ions can cause a change in battery capacity balance. Once the battery's capacity balance state changes, this change is irreversible and can be accumulated through multiple cycles, causing serious battery cycle performance. influences.

There are many factors that affect the cycle life of lithium-ion batteries, but the underlying cause is that the amount of lithium ions involved in energy transfer is decreasing. It should be noted that the total amount of lithium in the battery is not reduced, but the "activated" lithium ions are less. They are blocked in other places or the active channels are blocked, and they are not free to participate in the cycle charge and discharge. process.

Then, as long as we figure out which lithium ions that should have been involved in the redox reaction, we will be able to figure out the mechanism of capacity reduction, and we can take measures to delay the decline of lithium battery capacity and improve The cycle life of lithium batteries.

Through the previous analysis, we know that there is no metal form of lithium in lithium-ion batteries. Lithium is either in the form of metal oxides or carbon-lithium compounds or in the form of ions.

The deposition of metallic lithium not only causes a decrease in cycle life, but also causes a short circuit between the positive and negative electrodes, causing serious safety problems.

To solve this problem, a reasonable ratio of positive and negative materials is needed, and the conditions of use of the lithium battery are strictly limited to avoid exceeding the limit of use. Of course, starting from the rate performance, it is also possible to locally improve the cycle life.

2. Decomposition of the cathode material

The lithium-containing metal oxide as a positive electrode material, although having sufficient stability, will continue to decompose during long-term use, producing some electrochemically inert substances (such as Co3O4, Mn2O3, etc.) and some flammable gases. The capacity balance between the electrodes is destroyed, resulting in an irreversible loss of capacity.

This situation is particularly noticeable in the case of overcharging, and sometimes even severe decomposition and gas release occur, which not only affects battery capacity, but also poses a serious safety risk.

In addition to strictly limiting the charge cut-off voltage of the battery, improving the chemical stability and thermal stability of the positive electrode material is also a feasible method for reducing the cycle life.

3. SEI film on the electrode surface

As mentioned above, in the lithium ion battery with carbon material as the negative electrode, the electrolyte will form a solid electrolyte (SEI) film on the surface of the electrode during the initial cycle. Different anode materials will have certain differences, but the SEI film The composition is mainly composed of lithium carbonate, lithium alkylate, lithium hydroxide, etc., of course, there are also decomposition products of salt, and some polymers and the like. 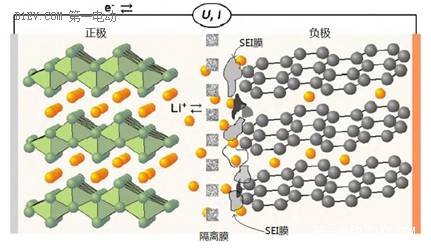 The formation process of the SEI film consumes lithium ions in the battery, and the SEI film is not stable, and will rupture continuously during the cycle, exposing a new carbon surface and reacting with the electrolyte to form a new SEI film. Constantly causing continuous loss of lithium ions and electrolytes, resulting in a decrease in battery capacity. The SEI film has a certain thickness. Although the lithium ion can penetrate, the SEI film may cause blockage of the diffusion channel of the surface of the negative electrode, which is disadvantageous for the diffusion of lithium ions in the negative electrode material, which also causes the battery capacity to decrease.

4. The influence of electrolytes

In the process of continuous circulation, due to the limitations of chemical stability and thermal stability, electrolytes will continue to decompose and volatilize, accumulating for a long time, resulting in a decrease in the total amount of electrolytes, insufficient infiltration of positive and negative materials, and incomplete charging and discharging reactions. , causing a decline in the actual use capacity.

The electrolyte contains active hydrogen and metal ion impurities such as iron, sodium, aluminum, and nickel. Because the oxidation potential of the impurity is generally lower than the positive electrode potential of the lithium ion battery, it is easy to oxidize on the surface of the positive electrode, and the oxide is reduced at the negative electrode, continuously consuming the positive and negative active materials, causing self-discharge, that is, changing the battery in the case of abnormal use. Discharge. Battery life is determined by the number of charge and discharge cycles, and the electrolyte containing impurities directly affects the number of battery cycles.

The electrolyte also contains a certain amount of water, which will chemically react with LiFP6 in the electrolyte to produce LiF and HF, which in turn destroys the SEI film, generates more LiF, causes LiF deposition, and continuously consumes active lithium ions. Causes a decrease in battery cycle life.

5. The diaphragm is blocked or damaged

6. The positive and negative materials fall off

The long-term stability of the binder and the good mechanical properties of the battery will delay the rate of decline in battery cycle life.

Lithium-ion batteries have reasonable conditions and ranges, such as charge and discharge cut-off voltage, charge and discharge rate, operating temperature range, and storage temperature range. However, in actual use, abuse beyond the allowable range is very common. Long-term unreasonable use will cause irreversible chemical reactions inside the battery, causing damage to the battery mechanism, accelerating the aging of the battery, resulting in a rapid decline in cycle life. It also creates a safety incident.